For us Catholics out there, Lent started this Wednesday. Bring on six and a half weeks of reflection, giving up something, and meatless Fridays. Meatless doesn't mean no seafood, though, so for this first Friday of Lent, I tackled something I've often eaten, but never attempted to cook: mussels.

Here's the nifty bits about this meal: 1) It easily serves two, maybe three. I split this meal with my roomie, that lucky duck. 2) It's cheap! I got 2.5 lbs for $4.99, No joke. (Oh Wegmans, let me count the ways...) 3) It's pretty quick to make. So what should I make with it? I asked the guy at Wegmans for some good ideas for sides and he was quick to suggest the baguette, or roasted asparagus, or roasted potatoes, or a ceasar salad (seriously, I love Wegmans, and no I don't get paid to say that). I opted to go with the easiest option and sliced up a baguette to sop up the sauce.

Now I'll admit, dealing with live animals makes me kind of squeamish. And you KNOW they're alive because you tap on the open ones, if they're close... well, I wanted to apologize to it for it's hot and steamy (and tasty) death. Not only did the living thing get to me... as we all know I'm a baker. I like set measurements and a defined process. But i couldn't find a recipe that I really loved for this, so I winged it. I was definitely out of my comfort zone, but they turned out pretty good. They were cooked to perfectly plump. The sauce wasn't the best I've had in my life considering I didn't actually season it... many recipes called for some kind of herb - parsley or tarragon or thyme. I didn't have any so left them out. I thought it was missing SOMEthing (probably those herbs, heh) but couldnt put my finger on exactly what, but still entirely satisfying. 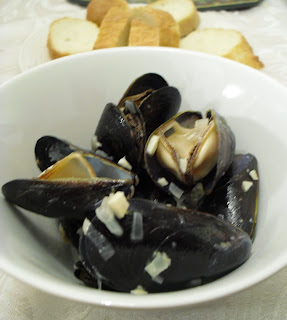 Not the clearest picture, but the best one I got this time around. I just really wanted to eat!

Make sure the mussels are debearded. I rinsed them in a big bowl after, too. Make sure to discard any that are open and don't close when you tap them against the sink - they're dead already, and not by my hand!

Melt the butter with the olive oil over med-low heat in a large pot. Add in onion and garlic and cook until translucent. Add the zest of a lemon and half of the juice, and the glass of wine. Bring it to a boil and simmer until liquid is reduced by half. Put the mussels in the pot and close the lid tight. Let it cook for 3 minutes or until cooked, shaking once or twice in the process. Peek in - if they are opening up, they're done. Take them off the stove.

Put the mussels in a large bowl and cover to keep warm, leaving the mussel liquid in the pot. Bring that back up to a simmer. Add butter and the rest of the lemon juice. Let simmer until sauce reduces a bit - add salt to taste. Pour over mussels.

Slice up a baguette and enjoy!
Posted by Caroline