It's been a while since I made an egg-based breakfast item, so here's a spinach and feta fritatta chock full of flavor and is healthy, too: 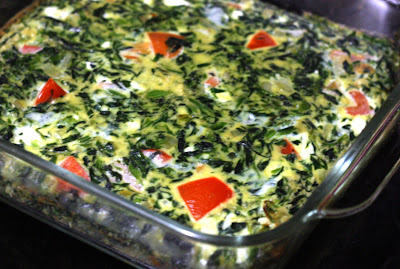 I'm a huge fan of these eggy bakes because you can make them ahead of time, choose any variety of flavor combinations (see here, here, or here). You can make them with meat or straight up veggie, like this one. This is obviously mostly spinach. Not gonna lie, I don't know all the specifics and I'm not a nutritionist or any kind of health professional, but I know it's one of those super veggies that's full of vitamins and fiber and stuff. Look how GREEN. You just know that HAS to be healthy! 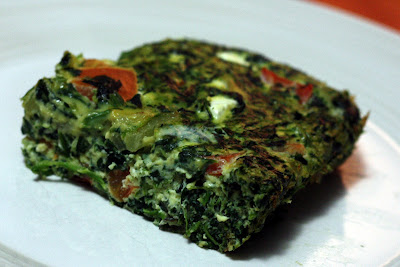 Now, it's not JUST spinach in there. There's a bunch of feta for a salty punch, onions for sweetness, and tomatoes for color and some acidity. I cut it into 4 hearty pieces because this'll be my breakfast for the week. Mmmm healthy.


Preheat oven to 350 degrees. Spray an 8x8 glass baking dish with cooking spray and set aside.


Beat eggs and egg whites in a large bowl (something that gives you space to really get some air whisked in). Salt and pepper. Set aside.


Saute onion in a bit of oil over medium heat until it softens. Add in the spinach and evenly mix. Add salt and pepper. Mix in the tomatoes, then stir to mix evenly.


Give the eggs one more beating to incorporate some air and pour into the baking dish. Evenly add in the spinach mixture. Evenly sprinkle the feta. Use a spoon or fork to mix spinach and feta into eggs.


Bake for about 30 minutes, or until center is set. After you take it out of the oven, use a knife or offset spatula and run it against the sides to separate the egg from the sides. Allow to cool a bit. You can cut it into as few as 2 pieces or as many as 8. Enjoy.
Posted by Caroline 1 comment:

I love Sundays because I have plenty of time to cook something from scratch. None of this tired or rushed throwing a meal together stuff - that's the rest of the week for me, haha. Nope. Sundays I happily "slave" over a hot stove taking the time to season and taste and really enjoy the process of creating something delicious. Like this shepherds pie: 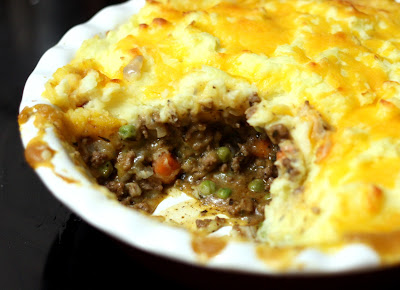 When I think of shepherds pie, this is EXACTLY how I imagine it should taste. It's meaty and has just enough gravy. Being a potato lover, I went slightly overboard with the mashed potato topping... although, really, is there such thing as too much mashed potatoes? It's hearty comfort in a pie dish, the kind of meal that makes a man go back for seconds, thirds, and probably fourths, depending on how much you scooped out each time. And IF there are leftovers, it reheats wonderfully to make a perfect Monday night leftovers dinner :-)

Meat Filling
1 lb ground beef (I used 80/20, but I'd go up to but no more than 90/10)
1 medium sweet onion, diced
1 C chopped baby carrots (cut them into thirds, so they're about 1/2")
2 Tbsp flour
1 tsp dried oregano
1 tsp dried basil
1/4 tsp dried thyme
1/4 dried rosemary, then crush between your fingers
2 tsp dried parsley
1 1/2 C reduced sodium beef broth
3 Tbsp tomato puree (because I had some leftover, better than having to open a new can of paste)
1 C frozen peas
salt and pepper to taste

Preheat the oven to 400 degrees, and then start the potatoes because you can make the meat filling while you're waiting for the taters to come to a boil and cook: Cut potatoes in half lengthwise, then cut each half into even quarters. Put in a large pot or stock pot and cover with cold water. Bring to a rolling boil. Cook about 10-15 minutes or until fork tender.

Heat a large pan (10"-12" and deep enough to fit the meat filling) over medium heat, and add the meat. Break up with a wooden spoon. Sprinkle a light layer of salt. (You may want to spoon off some of the fat that releases. Or not!) Add in onion and carrots and cook, stirring regularly, until meat is brown and onions are just starting to turn brown. Stir in frozen peas.

Stir in the flour, oregano, basil, thyme, rosemary, and parsley. Evenly combine broth and tomato puree in a bowl, then pour into the meat mixture. Add a little bit more salt and a few grinds of pepper and stir. (Don't add too much salt and pepper yet because the gravy will reduce, concentrating the flavors.) Simmer, reducing the liquid until you get to the gravy consistency you want (mine took about 15-20 min). Taste and season with more salt/pepper to your liking.

Let's not forget about the taters! While the meat is simmering, keep an eye on the potatoes. Drain them after they are fork tender, then return to the pot. Mash lightly, then add in butter, milk, and cream. Mash and whip until fluffy. Season with salt and pepper to taste.

Pour the meat filling into the pie dish. Use the ice cream scoop to plop out an even layer of the potatoes over the meat. (You don't have to use a scoop - it's just a fast way to create a layer that'll be easy to spread evenly.) Spread out the potatoes to create an even layer, or get all artsy and make a design or something. Sprinkle with cheese. Put onto a baking sheet (to catch anything that drips) and put into the oven. Bake for 20-25 minutes or until bubbly and the cheese is melted. You can also add the step of turning on the broiler for a few minutes to get a browned crispy top... I plan to do that next time. 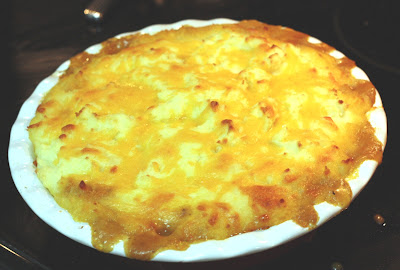 It's going to be ridiculously hot, so give it a while to cool down before you chow down!
Posted by Caroline 1 comment: