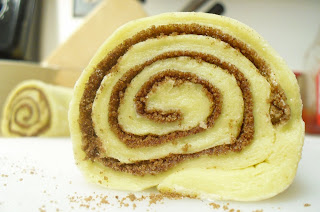 Snowmageddon. Tsnonami. Snowpocalypse. Snowcano. And... snOMG that's a ton of snow. Mother Nature dumped between 2-3 feet on the DC metro area in about 24 hours, leading all those cute little snowriffic phrases. Or you could just call it the Blizzard of 2010, but that's not nearly as fun, right! I heard the average snowfall a *year* in DC is like 20", so this is quite the special happening. Wanna see?
Because I haven't touched the back with a shovel yet, here's a good idea of just how much we're talking about: 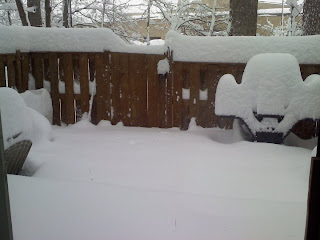 That's a car under that tree, poor girl. 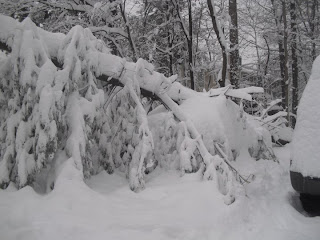 The snow weighed down quite a few trees in the area: 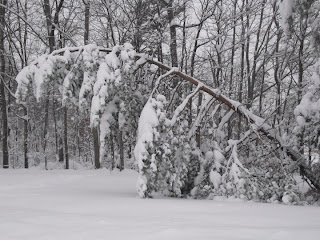 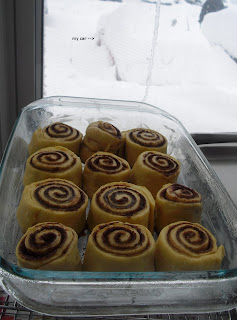 Knowing that we'd be snowed in over the weekend, I wanted to make something that I had otherwise never quite had time for: the overnight - excuse me, SNOvernight (I can go on and on with these, folks) cinnamon rolls from Alton Brown. Look at them proofed and ready to bake with all that snow outside...

Actual hands on time was probably 20-30 minutes, and then the rest is rising or baking, during which I was either shoveling or sleeping. I also didn't want to bother looking for the dough hook for my mixer, so I just knead it by hand. They turned out to be nice and fluffy, albeit a bit burnt because I wasn't paying close attention to baking time... but once frosted, they were the perfect reward for a hard morning's work.
Snovernight Cinnamon Rolls
adapted from Alton Brown
dough:
1/4 C sugar, split
6 oz. buttermilk, split
1 packet active yeast
4 egg yolks
1 egg
6 tbsp butter, melted
4 C flour (approx)
1 1/4 tsp salt
filling:
1 C brown sugar
1 1/2 tbsp cinnamon
3 tbsp butter, softened
Warm up half the buttermilk and stir in half the sugar and the yeast. Let sit until it gets bubbly. In a large bowl, whisk together the rest of the buttermilk, sugar, egg yolks, egg, and butter. Add in the yeast mixture and stir. Add salt and 2 cups of the flour, and use a wooden spoon combine, stirring until it forms a ball and pulls away from the sides of the bowl. Knead for about 5-8 minutes, adding flour as necessary to get a soft and moist but not sticky texture. Lightly oil a large bowl, and put dough in it. Spin it around to coat with oil, then cover with a cloth and allow to rise for 2-3 hours - it should double in volume.
Mix together the sugar and cinnamon in a bowl and set aside. Butter a 9x13 glass baking dish.
Turn dough out onto a lightly floured surface and shape into a rectangle. Roll into an 18x12 rectangle, the long side closest to you. Evenly spread the softened butter onto the dough, leaving a 1/2" line free at the top edge. Spread the cinnamon-sugar mix over the dough, leaving about a 3/4" border at the top edge. Starting at the long edge closest to you, roll the dough into a tight cylinder. If it's a bit uneven in thickness, gently squeeze til it's even. Using a serrated knife, cut into 12 even pieces. Arrange rolls cut side down into the baking dish, cover tightly with plastic wrap, and put into the fridge overnight. Sleepy time.
The next (snowy) morning, take the plastic wrap off the dish and put into the not-turned-on-yet oven on the middle rack. Place a shallow pan on the bottom rack, and fill about halfway with boiling water. Close the oven and allow to proof for 30 minutes - the dough will puff up a bit. Take both the rolls and the pan with the water out.
Preheat oven to 350. Bake cinnamon rolls about 25 minutes or until the edges are golden brown. (I baked at 30 and the burned a bit, so watch them,)
Icing:
2 tbsp butter
4 oz cream cheese
1/2 tsp vanilla
2-3 tbsp milk
powdered sugar to the sweetness you want (I just kept adding byt the tbsp-full until it got there
While the rolls are cooling, prepare the icing by blending all the ingredients together. Once it's to the sweetness you like, slather them on the cinnamon rolls and enjoy.
Posted by Caroline