Today is National Macaron Day. Yep, didn't know that macarons had their own day either. Good excuse to use part of my Memorial Day weekend to bake? Yes. BTW, I've also noticed that I've made enough macaron recipes that they should get their own tag. Yay macarons! 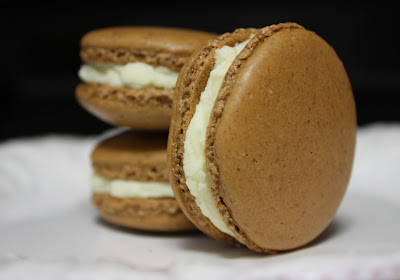 For the coffee lover, I made espresso macchiato macarons. A macchiato is a shot of espresso with a dollop of foam, so it's got the bite of espresso softened a bit. To mimic that, these have an espresso shell with a white chocolate ganache filling. (A side note about the ganache - don't let it chill too long or it'll be way too hard to spread like mine was, thus why it's a touch uneven.) The shell's intense and the white choco rounds off the edge. If you want a more mild coffee flavor, cut the espresso back to 1 tsp.

Age the egg whites: keep egg whites in a container in the fridge for 3-5 days, or at room temperature for 24 hours.

Make the shells: Combine the almonds, confectioners sugar and espresso powder and put into food processor and grind until it looks fine. Sift into a large bowl. Dump the stuff that doesn't go through the sieve back into the food processor and repeat. Keep repeating until the majority of if is sifted into the bowl.

In a super clean mixer fitted with the whisk attachment, start beating egg whites at medium speed. When it gets bubbly enough that it looks like bubbly dish soap, up the speed to high. Add the sugar little by little until the foam turns into shiny meringue, the consistency of shaving cream. Stop when you can make slightly stiff peaks.

Fold in half of the dry ingredients until mostly combined. Fold in the rest.  It's done when you can cut the spatula through the batter and it sinks back into itself in 10 seconds. It shouldn't take more than 50-55 strokes  total.

Pipe onto parchment lined baking sheets - about the size of a quarter or half dollar. Make sure to leave at least 1-2" between them because they'll spread. Let sit for 1 hour.

Make the filling: Chop chocolate well and put in a heat proof bowl. Heat cream in a small pot over medium heat until the edges start to bubble. Add to the white chocolate. Allow to sit for a minute. Stir until smooth. Whisk in the butter. Allow to cool to room temp. Beat again with a whisk. Fill the cookies. 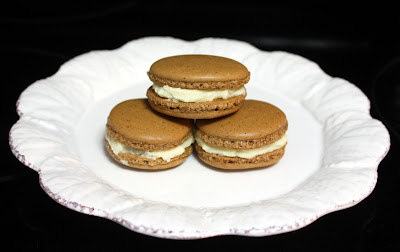 As usual, all macaron recipes are inspired and adapted from Tartelette.
Posted by Caroline 2 comments:

Mayonnaise is a condiment I only got into as an adult. My mom didn't put it on sandwiches when I was in grade school, and I don't recall ever eating a chicken/egg/potato salad that I liked when I was young, so I just never had a taste for it. I didn't know so many awesome dips had it as an ingredient until I started making them myself. Not sure when it all changed, but now I love me some mayo. 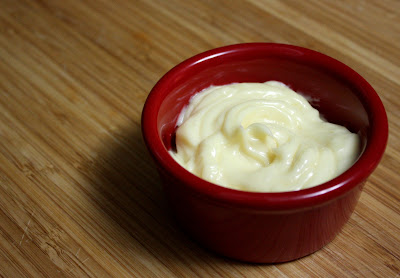 I've been buying the stuff in jars for years, not knowing that all along I've always had all the ingredients to make it at home. It took maybe 15 minutes (the manual way) and this tastes WAY better than the jarred stuff. Creamy, a touch of tang and salt. Plus I know where the ingredients came from, so it's "healthier" mayo, lol. That being said, fresh ingredients means that unlike the store bought kind, this will only last about a week in the fridge. So given that burger season is officially underway, use it up on those or sandwiches or salads and enjoy!

In a glass bowl, whisk together the yolk, mustard, salt, and sugar until combined. Whisk in the lemon juice and vinegar 1 tsp at a time, beating well after each addition until well combined.

(This is where the patience kicks in, so brace yourself, and your arm.)

Add the oil very little at a time (about 1/4-1/2 tsp), whisking vigorously with each addition, until it thickens and lightens in color. (This is you emulsifying, yay.) When it gets to that point, you can start adding the oil in a little more at a time (like a tablespoon or two), whisking until it all gets incorporated and thickens. If it gets too thick, add a little bit of water to think it out to the consistency you like.

Use immediately or refrigerate up to a week.

Be advised that this does use raw egg, so please use the freshest you can find. If you're not comfortable eating raw egg cuz of the risk of salmonella, I don't recommend making this recipe.
Posted by Caroline No comments:

Email ThisBlogThis!Share to TwitterShare to FacebookShare to Pinterest
Labels: condiments

Soooo remember how in my tortilla espanola post I mentioned I had a few unfinished posts I promised to publish? This is one of them. So, pretend that it's Passover. Yes that was over a month ago, thus the pretending. Picture me and 2 friends celebrating it with a nice lil Passover lunch. There was matzo ball soup from Jon, and lamb stuffed tomatoes by Ang. And as usual, I rounded it out with a sweet treat: matzo toffee! See the 3 layers... matzo cracker, toffee, and chocolate: 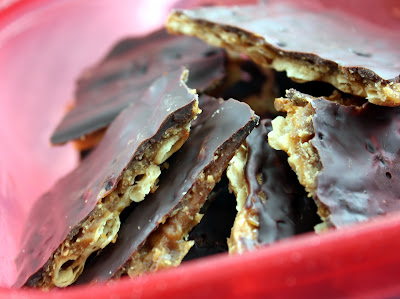 Not gonna lie, this is kinda addictive. It's salty, sweet, crunchy, and in this case, kosher! Plus it was a breeze to make (if, ya know, you're used to making candy... but this is kinda cool because it doesn't require a candy thermometer.) A very popular variation is using saltines instead of the matzo, and I look forward to making that version. Make them for the holidays. Give them to friends. They will like you more. Promise :)

Preheat oven to 350. Line a baking sheet with aluminum foil, overlapping over the edges. Arrange matzo crackers into one even layer so edges are touching - you'll probably have to break some to make it fit. Set aside.

Melt butter over medium heat, and mix in brown sugar and salt. Bring to a boil, and cook, stirring, for 3-4 minutes. Take off heat and stir in vanilla. Pour over the matzo and use a silicone spatula to spread into an even layer over the crackers. Bake for 5 minutes or until it looks bubbly.

Take out of oven. Spread chips over the toffee. Let sit for 2-3 minutes or until you see them starting to melt.

Spread the chocolate in an even layer. Allow to cool completely. Break into pieces. Eat!

One side note about the chocolate... I used both Nestle semisweet chips (left) and Guttiard 72% bittersweet (right). 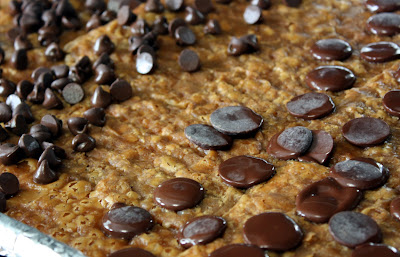 The Guttiard melted soooo much smoother than the Nestle, you can actually see the difference in the pic. I don't know if it's because of the % cocoa or the quality of the chocolate itself. Maybe I will try 2 versions of the same brand in the future just to find out. Either way, try to use the best quality chocolate you have on hand... your taste buds will thank you!
Posted by Caroline 1 comment:

Email ThisBlogThis!Share to TwitterShare to FacebookShare to Pinterest
Labels: holidays, sweets: other 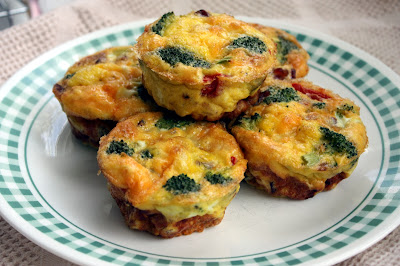 I love eggs. They provide such a great canvas for different flavors and meals. Whether scrambled, poached, or whipped up into omelets, I could eat them every day.  Like this morning, I wanted to use the last of the veggies sitting in my fridge, so I made some personal fritattas, which are essentially omelets made in a muffin tin. They're similar to the tortilla espanola I made last week, except smaller and with different veggies... but same general idea.

The beauty of this recipe is threefold: you can use just about any combination of flavors in it, they are easy to make ahead then grab and go as you need, and they're healthy! You can personalize these any way you like. Today I used cheddar, shallots, tomatoes, broccoli and bacon because that's what I had on hand. Leave out the bacon and make it vegetarian. Add more meat. Use onion instead of shallot. You can use spinach and feta, or ham and cheese, or sausage and cheese... use whatever combination floats your boat!

Preheat oven to 350. Spray the heck out of the muffin tins.

Heat oil in a small pan over medium heat and sautee shallots until soft. Set aside.

Microwave broccoli with a tbsp of water for 1 minute to precook them a little bit. Drain, and set aside.

Beat the eggs in a large bowl. Sprinkle with salt and pepper - remember your cheese is salty so don't over do it! Mix in the shallots. Pour half of the among the 6 muffin cups. Add the broccoli, tomatoes, and bacon to the muffin tins. Sprinkle with cheese. Add the rest of the eggs.

Bake for 25 minutes. They will rise, and then fall. Eat!

Or refrigerate them - these make a great grab and go meal. These will be my breakfast or snacks for the week. You can freeze them, too, to eat later. Heck if you want, you can make these in average or even mini size muffin tins, and make ahead for a brunch buffet, too.
Posted by Caroline No comments:

Email ThisBlogThis!Share to TwitterShare to FacebookShare to Pinterest
Labels: breakfast, meal for 1

I can't believe it's May already and I've gone this long without posting! I've been cooking, I swear. I have probably 3 other posts saved to finish later. But really I've spent most of the last couple months working my tail off. And vacationing in the Dominican. But mostly working, lol. My goal this month is to finish those other posts and get back to sharing!

While I know it's Cinco de Mayo today, and that's totally Mexican, I made a Spanish dish last night. As in Spain. As in the tortilla espanola, which is essentially a potato omelet. It's one of the simplest foods out there - eggs, potatoes, onions (if you like), oil, and some salt and pepper. For so few ingredients, the key is in the execution. This took forever to make (so set aside plenty of time!) because I cooked each step low and slow. Each part was soft and tender without falling apart, so each ingredient's integrity is maintained, yet balanced delightfully with the other flavors. See - you can see the different potato pieces in the tortilla. Yum! 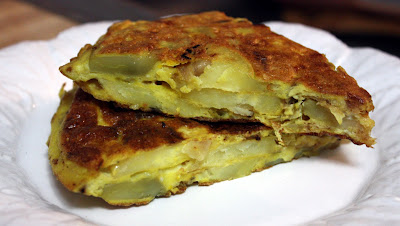 Heat 1/3 C oil in a large skillet over medium low heat. Add half the potatoes and cook, stirring occasionally, until just fork tender. This takes about 20 minutes. Repeat with the rest of the potatoes. Season with salt and pepper to taste.

If necessary, add a little oil to pan, and turn heat up to medium and cook onions until soft and golden - about 15 minutes. Add to bowl of potatoes to cool a bit. Add salt/pepper if needed.

Beat eggs in a large bowl. Add potato/onion mix. Pour into pan and allow bottom and edges to set - about 10 minutes. Loosen edges and bottom with a spatula so it can slide out of the pan easily.

Here's where you need to work pretty quickly so nothing spills: Slide onto a large plate, top with another plate, flip over (so cooked side is on top), slide back into pan. Cook for another 3-5 minutes until cooked through and set in the center.