It's so cold, and there are rumors of another midweek snowstorm. Last week's midweekstorm totally crushed VA/DC/MD... friends and coworkers were reporting 6, 7, even 8 hour commutes home (if they even made it home at all)! Holy sheesh, right. I am SO glad that I left work before it really started and I got home with no problems. I was all warm, toasty, catching up on DVRs cuz I never lost power... Now I'm just bragging, lol. Anyways, like I said, it's pretty cold, so it's time for  soup. 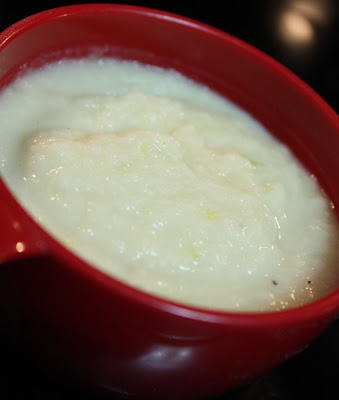 Normally I prefer brothy soups like miso, wonton, or this or this. I had a potato and leek soup at Cafe Du Parc (it was also brothy) the other week and I liked the flavor. When I was looking for similar recipes, nearly all of them were a creamy or thick version, so hey, why not branch out? And by creamy and thick versions, I mean they usually call for heavy cream and a lot of butter. To lighten it up, I used a touch of milk and since I had some cauliflower left in my freezer, and since I know cauliflower make acceptable mashed fauxtatoes, I figured I'd toss them into the mix. Verdict? It makes a hearty and slightly creamy and oh hey it's generally pretty healthy soup. If the snow does come and I'm stuck indoors, at least I know I'll have something nummy to eat!

4 C chicken stock
1.5 lb white potatoes, peeled and cubed into 1" pieces
1 lb cauliflower florets
1 leek, (white part and a bit of the green, but not the leaves up top... about 3-4" of it)
3 tbsp butter
1 tbsp canola oil
2 tbsp white wine
1/2 C milk (I used 1%)
salt and pepper to taste
Special equipment: immersion blender or food processor

Put stock, potatoes, and cauliflower florets into a medium pot and bring to a boil.

While the potato and cauliflower is coming to a boil, cut the leek in half lengthwise and soak in water for a few minutes to clean. Take out and slice finely. In a small pan, melt butter with the canola oil over medium. Add the leeks and sautee until translucent. Add the white wine and cook 3 more minutes.

Check that the potatoes and caluflower are fork tender. Turn off heat. Add leeks and milk and mix. Using an immersion blender*, blend until smooth. Season with salt and pepper to taste. I used about 1 tsp salt and just a bit of pepper. If you want it thinner, add more broth and reseason accordingly.

* If you don't have an immersion blender, blend in batches in a food processor.
Posted by Caroline No comments:

Who doesn't love a chocolate chip cookie, right? (And whoever doesn't, don't trust them!) I don't actually remember the last time I made a batch, so I figured I'd whip some up. It was also a good opportunity to try yet another recipe claiming to be the best. This time: Cooks Illutstrated's Perfect Chocolate Chip Cookies. These are so good they may actually live up to the name: I'm usually good at only having 2 or 3 cookies from a batch, but I Cannot. Stop. Eating these. 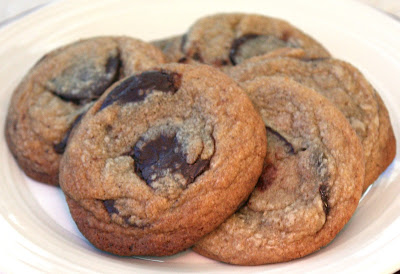 Funny thing is I posted a choco chip cookie recipe about a year ago. Didn't like it one bit. THIS recipe, though, I'd totally hit the like button if I had one! I dare say it's on par with, maybe even better than Alton Brown's recipe, which has been my go to classic CCC recipe for as long as I can remember. Like Alton Brown's, it involved an egg plus a yolk. Like the NYT recipe, I used chocolate disks. Unlike both, the CI version involves browned butter. (Sidenote #1: I've said it before and I'll say it again: browned butter = heaven, which may be the tipping point as to why this recipe is awesome!) (Sidenote #2: unlike most cookie recipes, you can also make this without a stand mixer, so added bonus I suppose.) My verdict = 9.5*. I could have been happy eating just the dough.

* I "accidentally" used 72% bittersweet chocolate disks for this recipe. By "accidentally" I mean that I was looking at a bunch of different recipes before baking, and bittersweet is what got stuck in my mind (I was looking at the NYT recipe). So I used the disks I had on hand, and it makes for a more sophisticated taste and I really liked how they created layers of chocolate to bite into. BUT. The Cooks Illustrated one calls for semisweet, and I bet it'd taste better because it's The Classic flavor. I have no doubt in my mind that had I used the semisweet, the flavor would be a solid 10! If I can't stop eating them now, I'm scared for when I do use the semisweet, lol. 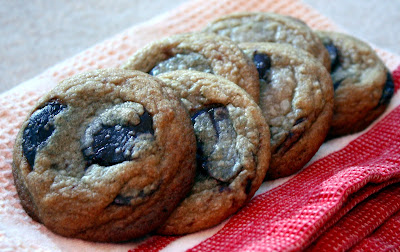 Over medium heat, melt 10 tbsp of butter in a saucepan or skillet. Continue cooking, swirling constantly, until butter turns slightly darker and smells nutty (or like toffee). Remove from heat and pour into a large heat proof bowl. Stir remaining 4 tbsp butter into it until melted.

Add white and brown sugars, vanilla, and salt to melted butter and whisk until fully incorporated. Whisk in the egg and egg yolk until mixture is smooth. Let it sit for 3 minutes, and then whisk again for 30 seconds. Repeat the 3 min-30 sec directions two more times. It should be lump-free, smooth and shiny.

Combine the flour and baking soda in a medium bowl and then mix until its even. Using a wooden spoon, stir into the butter mixture until just combined. Stir in chocolate chips. Refrigerate while you preheat the oven to 375.

It's not even a full week into 2011 and I can check off my Hit List item #1: caramel corn! I've been craving it, dreaming about it, drooling for caramel corn for weeks. Must've been those tins of popcorn we kept getting at work for the holidays, haha. Then it popped up on Tastespotting, and I had to make it. Plus I love popcorn - it's probably in my top 5 favorite foods I could eat every day. And I was at my mom's the other day and broke open a can of poppycock and couldn't put it down. It was time to make it for myself! 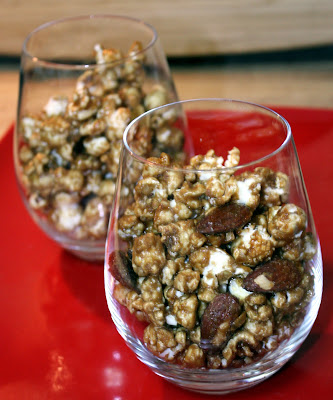 So, I've made toffee before, so you'd think I'd be confident in the making the candy part of this... except I've also attempted soft caramels before and ended up with a solid, entirely NOT soft piece of sugar candy. It's one of the few things I've ever had to toss out. So I was nervous, but luckily it was surprisingly easy! I read a couple recipes and just went with them versus pulling out my candy thermometer. Thankfully it worked! This is freaking awesome. Vanilla-y (we all know I'm a vanilla girl) because I "accidentally" spilled a little extra, crunchy, light, sweet... and addictive! When I first started making it I thought 20 cups was a lot of popcorn.,, Now I'm not sure if it'll make it to my family dinner on Thursday :-D If you like caramel corn - make it at home and enjoy :)

Pop the popcorn. Allow to cool. Place in a large roasting pan.

Preheat oven to 275. In a medium heavy bottom pot, melt the butter over medium heat. Add the brown sugar, corn syrup and salt. Bring to a boil, then stirring, cook for about 4-5 minutes. Remove from heat and add the vanilla (it'll sputter a bit) and baking soda. Stir until it gets fluffy and the color becomes lighter. Pour over the popcorn and stir until evenly coated.

Bake for 1 hour, taking out every 15 minutes to stir. Pour out onto parchment or wax paper lined baking sheets to cool. Once it's cool, break up into pieces and try not to eat it all :) 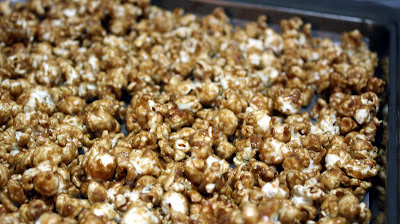 It's getting kinda chilly, which means it's a good time for soup! This hearty chicken tortilla soup is very easy to make using a bunch of canned ingredients and a rotisserie chicken, so it makes for a simple, any time meal. Also, this makes a lot - like half a stock potful - so you can freeze it and have some later, or just eat for a week, hehe. 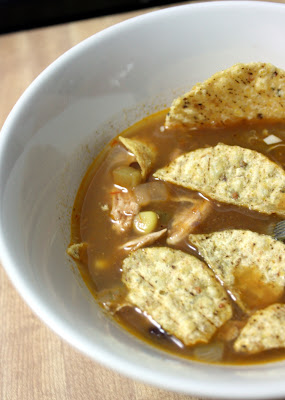 Chicken Tortilla Soup
1 tbsp canola oil
1 small onion, diced
1 clove garlic, minced
1 can black beans
1 can corn
1 jar salsa OR 1 can diced onions with jalapeno
1 box reduced sodium chicken stock
water, if you want it more liquidy (fill half of the stock box, shake, then dump into the pot)
1 rotisserie chicken, without skin, and shredded
1 1/2 tsp salt
1/2 tsp cumin
1/4 tsp chili powder
1/4 tsp cayenne pepper
freshly ground black pepper
shredded mexican cheese
tortilla chips
Heat oil in a stock pot over medium high heat. Add onion and cook for 2-3 minutes until softened. Add garlic and sautee another minute. Add the black beans, corn, salsa, stock and water and chicken. Turn up the heat and bring to a boil. Add spices. Drop down to a simmer and cook, stirring occasionally, for 20-30 minutes.
When serving, sprinkle with some cheese (which I didn't here, but it's much better if you do) and crushed tortilla chips.
Posted by Caroline No comments:

Warmest wishes for a healthy, prosperous, and delicious 2011! I spent New Years Eve quietly - at home watching Don't Mess With the Zohan, taking 10 minutes to watch the ball drop with Dick Clark, Ryan Seacrest, and <3 NKOTBSB <3. I was in recovery from a very spectacular, fun, and long Thursday night. Thursday was my golden birhtday = I turned 30 on the 30th! So you can see, the end of the year is a great time for me :-)

I have some recipes to post, but no pics yet. So instead, I'll do the same thing I did for last year, which is post a hit list of foods I want to conquer. No I didn't actually finish my Hit List 2010, but I got most, lol. They'll be an addendum to this new list, haha.

Bring it on!
Posted by Caroline No comments: