One time in college I made dinner for me, my roomie, and a boy. The boy said to me, "Cornish hen? Oooh fancy. That's, like, stuff they serve at weddings." I remember being kind of amused and confused at the same time because I grew up eating it as a quick weeknight meal. And the idea of eating one per person? Absurd. We had one hen for 3 people, with some veggies and rice or Stovetop on the side.

My usual cornish hen preparation involves butter, salt, pepper, and an oven. Sometimes I'll shove sliced lemon up it's butt, too. Sometimes it's some smashed garlic cloves. Roast in the oven until done. But this time... I caught crazy-haired Anne Burrell's show on Food Network and saw this. First, the spices are some of my favorite. Second, it looked so easy! Therefore, I had to try it, and yay! I slightly burnt it (I've been burning a lot lately, ugh), but it's not good to eat the skin anyways right, so I just went for the meat, which was perfectly moist and tasty! 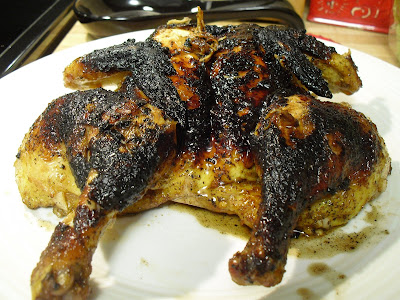 Pollo al Mattone
adapted from Anne Burrell
4 cloves garlic, smashed and minced
1/2 tsp crushed red pepper flakes
1 lemon, zested and juiced
3/4 tsp paprika (I used a mix of 1/2 tsp regular and 1/4 tsp Hungarian)
1 tsp cumin
olive oil
1 cornish hen, backbone removed and butterflied (recipe calls for 2)
kosher salt and ground black pepper
Special equipment: 2 pans that can be put into the oven. I used my 2 cast iron pans.
Combine the garlic, red pepper flakes, lemon zest and juice, paprika, and cumin. Drizzle in olive oil until it makes a paste. Put hen into a big bowl, massage it with the the paste. Cover and refrigerate/marinated overnight or up to 24 hours. 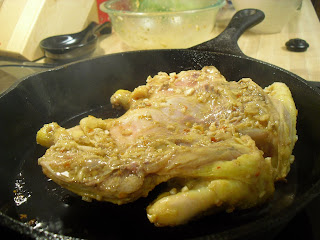 Preheat oven to 400. Coat the bottom of the other pan with some oil and heat over high. Season the hen generously with salt and pepper. Make sure hen is open, legs tucked under, and lay into pan skin side down. Spray the bottom of another pan with oil - since I used cast iron I wrapped it in foil first then sprayed. Place that pan on top to weigh down the chicken. (This one is called brick chicken because you could wrap a brick in foil and put in the pan to weigh it down. The cast iron was heavy enough for me. ) Cook til the skin just starts to brown, about 5 minutes. (This is also the part I lost track of time, thus slightly charring it, whoops.) 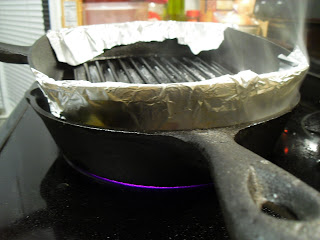 Put the entire thing - chicken sandwiched between pans - into the oven and cook for about 15 minutes. Check to make sure it's done (juice runs clear). Remove chicken from pans. Now. This is where I stopped. I didn't make the sauce - I was lazy, not gonna lie. But just in case you want some, click the link above for her full recipe.

I ate the chicken as is. There was just the right amount of heat from the red pepper, and neither the paparika or cumin was too overpowering. Delightful. Roasted potatoes or cauliflower go well with it. I imagine some couscous and sliced almonds would be a great side, too.