The first time I had quinoa was as a dinner side dish - warm, savory and delicious with pistachios and dried cherries and some kind of vinaigrette. I've been curious about it since, scanning the interwebs for recipe ideas. Somehow or other I ended up making it sweet (shocker, lol), and as breakfast: quinoa "cereal" with milk, fresh blueberries, dried cranberries, and roasted almonds for crunch. Can we say HEALTHY?! 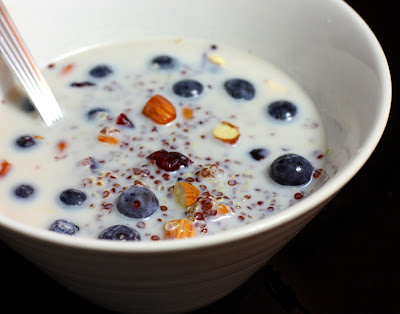 So, what is quinoa? Quinoa, pronounced "keen-wah", is something of a trendy health food that's making its way mainstream. By trendy I mean most people don't know what the heck it is, unless you're a blogger or a health foodie... but I hear about it more frequently (maybe because I'm both a blogger and foodie?) and am seeing it on more grocery shelves. Also, it's a seed, not a grain, even though it's often sold in the grain section because of the similar look and texture. It reminds me of a nuttier couscous. It's also a nutritional powerhouse, apparently, being an excellent source of protein and fiber and amino acids.

As breakfast, you can mix in lots of different fruits, dry or fresh. The quinoa itself provides many little mini crunches, but I need something bigger like almonds or pistachios for real textural interest. Next time I'd like it with blueberries and diced mango. I may also mix in some cinnamon and nutmeg and heat it up for more of a porridge feel, too. Lots of options here... as I'll also be using it as a dinner side in the future, so stand by for recipes one day.

Breakfast Quinoa Cereal for One
adapted from klutzy chef

Combine all ingredients in a bowl. Mix. Eat.
You can also heat up the quinoa, milk, and sweetener and then add everything else to it, too. 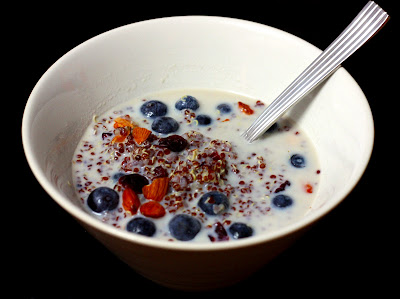 How to Cook Plain Quinoa

Rinse dry quinoa in a fine mesh strainer under warm water for a few minutes. You're doing this to remove the bitter saponins (nope don't know what that is, but I don't like bitter, so I rinsed).

The instructions on my box of red quinoa said to put quinoa and water into a small pot. Bring to a boil. Reduce to low heat and simmer, covered, for 15 minutes. Take off heat and allow to sit, covered, for 10 more minutes. Fluff with a fork.
Posted by Caroline

Email ThisBlogThis!Share to TwitterShare to FacebookShare to Pinterest
Labels: breakfast, meal for 1