I bought a bunch of kale the other day with the intent of making a green smoothie. You know... a fruit smoothie blended with with some a super veggie for extra nutrients. Yep, didn't quite get around to that, whoops. But I didn't want the kale to go to waste and I've needed another grab and go breakfast anyways so viola, breakfast fritatta! 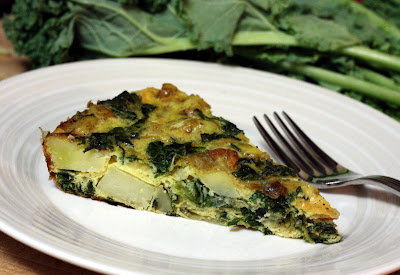 I was originally just going to make a straight kale and onion fritatta until I saw the link for adding potatoes, and what a great idea! It gives the fritatta some heft and textural interest. I wasn't intentionally going the vegetarian route, so if you wanna throw in some meat, brown up some sausage and throw it in there, too.

Kale and Potato Fritatta
slightly adapted from Eggs on a Sunday

1 Spanish onion, peeled, cut in half, and sliced into strips
2 Yukon gold potatoes, peeled and cut into 1" pieces
3 C kale, remove the stem and chop into bite size pieces
2 tbsp canola oil
8 eggs
salt and pepper
special equipment: cast iron skillet or a skillet you can put into the oven

Preheat oven to 400. Beat eggs in a large bowl.

Give the eggs one more whirl with the whisk to make sure it's beaten and airy. Check that the bottom of the pan has a glisten of oil (so the eggs wont stick), and then pour the eggs over the veggies and stir until it's even. Stir a bit to make sure the kale and potatoes are evenly distributed, too.

Put in oven and bake for 10-15 minutes or until it's all puffy. Take out of the oven. It will drop. Loosen the edges. Turn out onto a cutting board and cut into 6 pieces.
Posted by Caroline