Say hello to my very first meal of 2012! I had people over for NYE, and I wanted to make sure they woke up to something home cooked. So I brewed some coffee and got to work in the kitchen on this filling and possibly even sorta healthy casserole. And then I fried up a bunch of bacon to go with it :-) It tasted great topped with leftover guacamole and some sour cream, and I bet salsa would have gone really well with it, too - now I know for next time! Not a bad way to start the year at all. 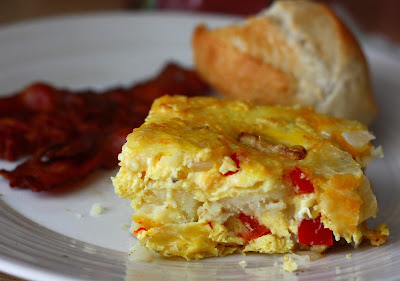 You could sub out frozen Potatoes O' Brien, but I bought a big bag of potatoes I needed to use. I roasted them with salt and pepper and olive oil for about 25 minutes at 450 a few days in advance and then just kept them in the fridge. You could also make the onions/pepper in advance, too. If you like a little kick, fine dice a seeded jalapeno or serrano pepper and toss it in with it, too. This is kinda like a really big, southwesternish tortilla espanola :) 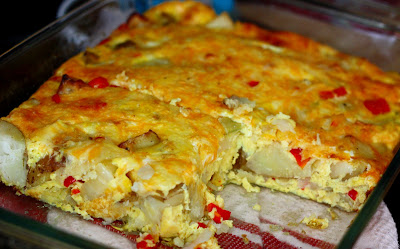 Egg and Potato Breakfast Bake
adapted from A Communal Table

In a large skillet over medium heat, saute onion in some canola/olive oil (or bacon grease, if you have any on hand, yum!) until it starts to get translucent. Add in the bell pepper and saute another few minutes until onion is soft. Season with a big pinch of salt and stir. Add to the potatoes and toss until evenly incorporated. Dump in an even layer into baking dish. Spread the cheese evenly over the taters.

In a large bowl, whisk/beat eggs until completely combined and starting to get fluffy. Season with a generous pinch of salt and a few grinds of black pepper. Whisk in the milk. Pour over the potatoes and cheese.

Bake for 35-40 minutes until middle is set. You should be able to insert a knife and it'll come out clean.
Posted by Caroline