Remember the first time I made macarons? I totally had beginners luck! And then the second time I made them? I pretty much impressed myself with how easily I took to these bad boys. You were probably thinking, what was she blabbering on about that first time about being all nervous about making macarons? Surely they can't be THAT difficult if she got it right the first time around... Sadly, my third time was NOT a charm.

Today's post will include no recipe, just pictures - THIS is why I was fretting way back when: 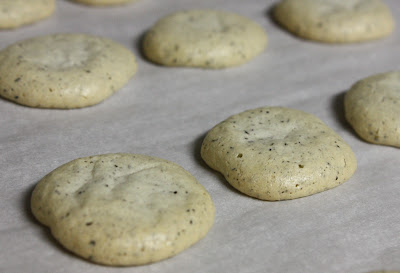 Where are the feet!? Why are the tops wrinkly? What are those black specks? (Oh wait, I remember now - those are tea leaves, hehe...) And how come this happened on my THIRD batch in the oven? I had to bake in 3 rounds... the 1st batch of the night came out nicely. The 2nd batch half of them rose with feet, the other half did not. The third batch? I'm still trying to wipe it from my memory.

First batch. Ooh pretty! Uniform. Smooth tops. All have distinct feet. Not as pretty as the last times, but hey I think they're acceptable... The texture of the cookie was right on. 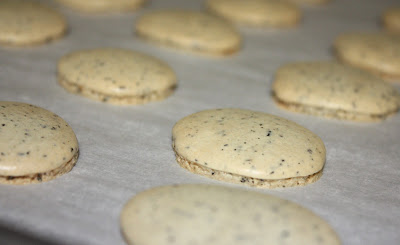 Second batch: Um, something is amiss. Notice the cracks up top. And how the ones on the right have feet but the ones on the left do not. Some of them even had, like, half risen to create half a... foot? 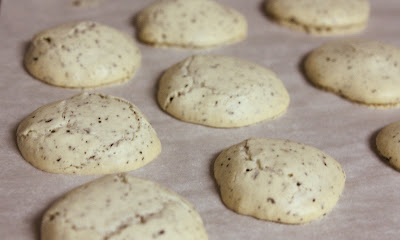 And you saw the pictures of the 3rd batch. I may have just shed another tear. Those were supposed to be macarons?

I have theories as to why:
1) I didn't measure with a scale, and instead used cups and tablespoons per Tartelette's recipe via bell'alimento.
2) I didn't age the egg whites.
3) I overbeat the whites.
4) The tea made the batter too heavy so it didn't rise properly.
5) I overmixed the batter.

BUT. How come my first batch turned out fine but then they got progressively worse? I don't get it!

Ugh. That's TWO cookie FAILs this week. (I forgot I had no raisins when halfway through making oatmeal raisin cookies, and it was so late the stores weren't open, so there may or may not be a stand mixer hanging out on my counter with creamed butter/sugar and a bowl of dry ingredients hanging out next to it waiting for said raisins...) TWO! I haven't messed up a batch of cookies since those stupid choco chip cookies (and I really dont think that was ME who messed up.) This is ridiculous. OH, and to add insult to injury, I messed up my new manicure while piping that last batch of reject macarons. (And why was I piping while waiting for my nails to dry? Oh... let's not talk about that...)

Tomorrow I attempt this again. Notice I never said they tasted bad... in fact they are downright delicious! They're just not RIGHT. If they turn out well, I will post a recipe. I will probably do a happy dance too. And I really like to dance, so let's cross fingers that it works out!
Posted by Caroline