Pigskin for Superbowl? Pshaw... how about pig flesh! Bacon inside of pork sausage inside of bacon. Three layers of pork, rolled, mmmm. That's right, I'm talking about the BACON EXPLOSION! 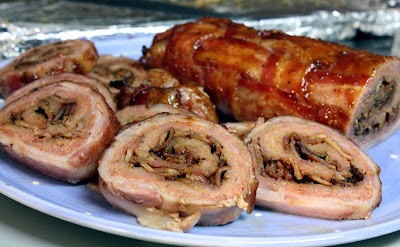 I feel like there should be an echo... the BACON ex-PLOOOO-ZHUNNNN... ZHUNnnnn... Shun...shunnnnn.....
I first heard about this bad boy when my girl Jen (hi Jen!) made it for some event and got 2nd place in an appetizer contest  (when really she shoulda won since 1st place was really an entree, right!). Oh, and apparently the NYT did an article about it in 2009. I've wanted to make it since, but could never really bring myself to. As my boss said the other day when I showed him the recipe, "it's like the inside of a cannibal's intestines!" Gross. But apt. But I didn't care, lol. If you're gonna make something for Superbowl, may as well go all out, right!
I so rarely do progress pics, but this is so awesome I just HAVE to :-)

BACON EXPLOSION!!!!
introduced by Jen, apparently in the NYT, and here's a link to the 1st search result from google

Take 10 strips of bacon and create a tight 5x5 basket weave. (What's a basket weave you ask? the NYT recipe describes it, and the BBQ addicts show it.) I should note that I had thinner strips so I eventually did 6x6 (don't mind the pic, I took 1 strip away eventualy). 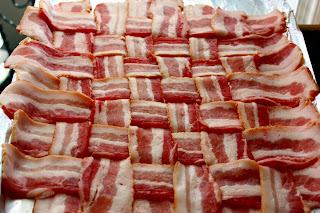 Spread all of the sausage over the basket weave of bacon. All the way to the edges in an even layer.
Preheat oven to 225. (Or you can smoke it, but I don't have a smoker, so we'll be baking.)

Snip the remaining bacon into 1-2" pieces. Fry to your desired doneness- when they're about halfway there sprinkle in about 1T of BBQ rub and keep cooking. Cool. Spread the cooled bbq bacon bits over the sausage in an even layer. 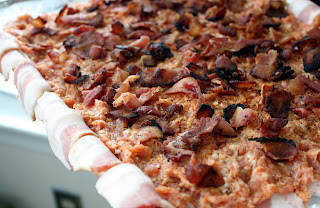 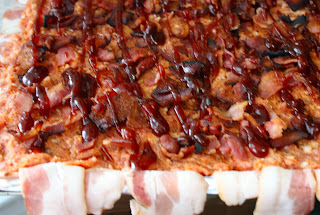 Carefully roll the SAUSAGE and COOKED BACON into a log -- you'll need to separate it from the bacon weave. Press it so there are no air pockets, and pinch the seam and the ends shut to seal in the crumbled bacon. Roll the log again with the bacon weave until completely wrapped. Turn it seam side down. Sprinkle with 1 T BBQ rub. 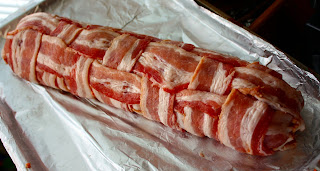 Bake until internal temperature reaches 165. It's approximately 1 hour for every inch of thickness. Glaze with BBQ sauce. 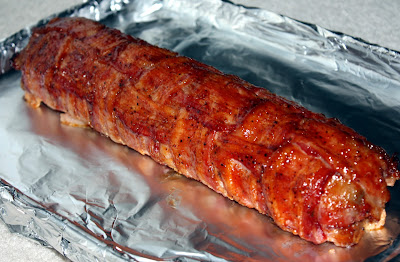