'm a Top Chef fan, especially this season because it's set in my home town. DC, despite being a small city, has a plethora of really great restaurants. That is partially thanks to renowned chef Jose Andres, who's the mastermind behind Jaleo (supposedly the place that brought tapas to DC), Cafe Atlantico, Minibar, Oyamel, and Zaytinya. (I've been to all except Minibar, which is the one Bourdain went to in his DC ep, and is definitely in the top 5 of my To Eat At list). The Chef at Zaytinya is Top Chef contestant from last season, Mike Isabella. (See how I brought that right back around :-)) One of the most memorable things I ever ate there was a crab (or was it lobster?) spanakopita which was a special during the Easter season a few years back. It was AWESOME.

So I've had a hankering to make spanakopita lately, plus it's on my Hit List. Lo and behold, Mike Isabella has a little instructional series on just this dish. Here's the first vid. He says "uh" a LOT, but once you get past that, it's a really informative set of videos. I watched it a few times to get an idea of how to do it, and viola - here's my spanakopita! 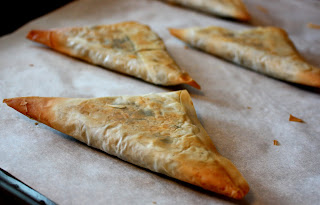 The first time I tried to make this, I was fresh out of college. I knew I was supposed to defrost the phyllo... so I left it on the table for, like, an hour. When I started to unroll it, it cracked almost immediately! I promptly quit trying to make it, and haven't bothered since, lol. But this time, it phyllo was not as tough to work with, simply because I actually prepared well - fully thawed (won't forget that one), damp towel to keep it covered, everything organized so I could move quickly. That being said, I still tore a few sheets. And the towel can't be that wet because the phyllo turns gooey.

Please enjoy the pretty process pics. I <3 my new camera!

Heat olive oil over medium high heat and sautee onions until half translucent. Add the leeks and sautee another 2-3 minutes. Add the green onion and sautee until everything is soft. 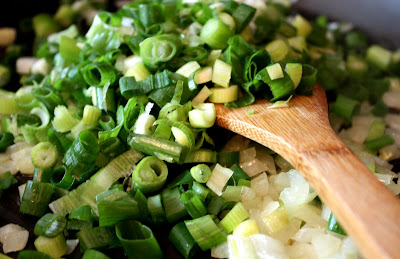 Turn off heat, then add spinach and mix until everything's combined. Add about 1/2 tsp salt and peppers to taste. Put into a large bowl and allow to cool while you prepare the phyllo.

Add the feta to the spinach mixture and season to taste. Mix in the egg.

To form the spanakopita: Lay out a strip of phyllo. Brush with clarified butter. Put a heaping tablespoon of spinach mix in the bottom corner. Fold over to form a triangle, press down the filling a bit, then keep folding (like making a paper football). Brush top with more butter. Place on parchment lined paper.  When you have enough for one tray, put in fridge for at least 30 min (and then repeat until you're done with filling). 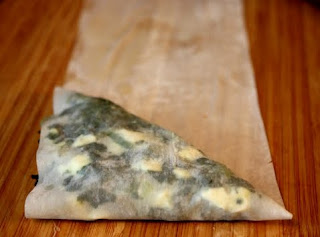 Make sure the oven rack is in the top 3rd, and then preheat oven to 350. Bake spanakopita for 8 minutes, then flip them over, and bake for another 3-4, or until the whole thing is toasty brown. 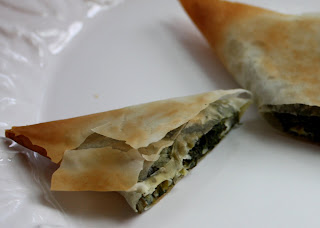 When I do this again (and I'll be making this again soon because I have leftover phyllo), I'm going to play with the size and shape. For one thing, the one I had at Zaytinya was shaped more like a cigar, so I'll try rolls. Also, I don't think that I got enough flaky layers, so I'll double up the sheets of phyllo.
Posted by Caroline