The September 2010 Daring Bakers’ challenge was hosted by Mandy of “What the Fruitcake?!” Mandy challenged everyone to make Decorated Sugar Cookies based on recipes from Peggy Porschen and The Joy of Baking. You can find the recipe on Mandy's blog. I followed the cookie recipe almost exactly - I just added a tsp or two of cinnamon to spice it up a touch!

We were supposed to decorate these cookies with a "September" theme. And while most of the American population starts thinking about football come September, I think of the same thing I think of for 3/4 of the year: softball. September is the beginning of the last season of the year - that last 8 weeks before the cold kicks in and I trade in the glove and ball for, well, different kind of gloves and balls (ski gloves and dodgeballs, but not at the same time!) I currently play on 3 teams, and because of the timing of when I got to bake, these cookies are dedicated to my Sunday night team, the Coconut Banger's Ball Club: 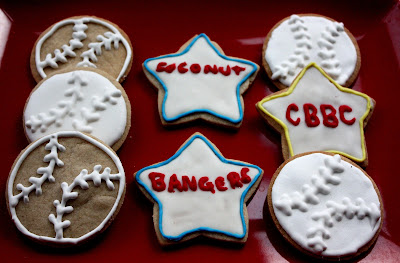 Super cute, right!
So I made cinnamon sugar cookies, and topped them with vanilla icing. We weren't required to make royal icing from scratch, so the first round of cookies I used a store bought cookie decorating icing. That's what I used on the stars. But I wanted to try the royal icing, too, so I whipped up a batch using meringue powder and used it to make the softballs. I have no idea if it turned out the way it was supposed to... but the icing dried well enough so I assume I got it right. I used a decorating writing icing tube thing for the red, blue, and yellow writing/outlines.
Posted by Caroline