I haven't yet met a rolled food I don't like. Cinnamon rolls, sushi, croissants, lumpia, mocha rolls, those little canned crescent dough things... And to add one more to the list - rugelach. 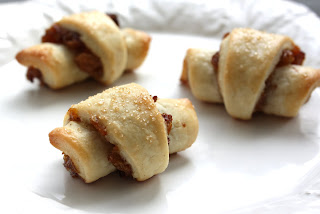 Pronounced "rug-uh-la," these are little rolled Jewish cookie - tender, just sweet enough, and completely addictive. It's either a yeast-based dough or a cream cheese based dough (like this one) that's rolled into a circle, then spread with a variety of fillings (jam, cinnamon sugar, chocolate, nuts and berries, etc - I'm partial to apricot preserves!), then cut into triangles that are rolled into little crescent shapes. They can also be shaped into logs and cut into little pieces: 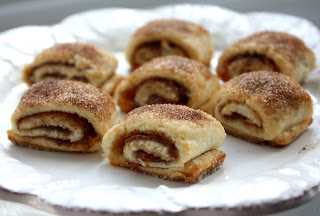 While rugelach are common enough that you can get them almost anywhere, they're particularly popular during Jewish holidays - and given that Rosh Hashanah just ended yesterday, I had to try my hand at them. Okay that's not entirely true, hehe, I'd already been planning to make these this week because I had some awesome ones in this deli in NY last weekend. Then I noticed all the happy new year statuses from my Jewish friends on facebook... good timing, right!
Rugelach
from Ina Garten

and one egg for the egg wash

Make the dough: Cream the cream cheese and butter until light. Beat in the sugar, salt, and extract. With the mixer on low speed, slowly add the flour until just incorporated. On a lightly floured surface, form into a ball. Cut into 4 equal parts, flatten into discs, wrap with plastic wrap. Refrigerate at least for several hours, or better yet, over night.

Prepare the filling: Combine the sugar and cinnamon. Place jam in a small microwave-safe bowl and microwave for 30 seconds. Stir until it's all liquidy. 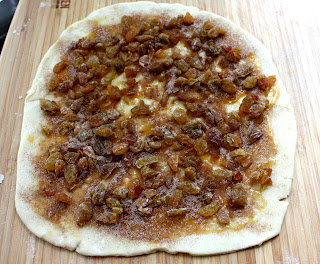 Use a pizza cutter or large knife to cut the disc into 12 wedges (like a piza is cut). Starting from the wide end, roll each wedge towards the point. (Keep in mind you can also roll into a long rectangle that's 4-5" wide, then spread, roll, and cut.) Place the roll with the point on the bottom (so they don't unwrap) onto a parchment lined baking sheet. Refrigerate for 30 minutes. Preheat oven to 350 while it chills. 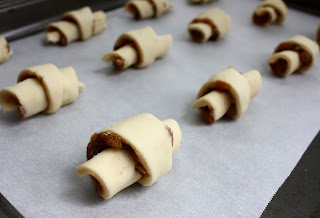 Beat the egg in a small bowl, then add a bit of water and beat well to make the egg wash. Brush each cookie lightly with egg wash. Sprinkle with sugar -- you can use more cinnamon sugar, turbinado, sanding sugar, or just plain sugar. Bake for 17 minutes.