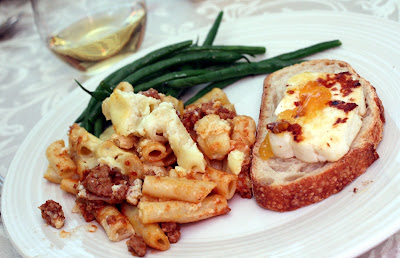 Since I wouldn't get to spend Christmas dinner with my dad and little brother, I made dinner for us for Christmas Eve.I went with something not so traditional and knocked off another Hit List item at the same time: pastitsio. Almost didn't happen, though -- I may have almost burned down my kitchen, haha. That's an exaggeration, sorta... Instead of turning on the burner to boil water, I ended up charring the bottom of the box of pasta sitting on the other burner, lol. By the time it stopped smoking and, um, glowing, half of the bottom was gone, lol. Don't worry, I saved the pasta and was able to make this!

So pastitsio... Never heard of it? It's a Greek casserole, kinda like lasagna: you layer pasta (in this case, tubular noodles), meat sauce, and bechamel, then bake.  It's not the same in flavor, given you use cinnamon and nutmeg in the meat sauce. The only change is that next time I'll double the bechamel (and go to the gym for twice as long, lol) cuz I LOVE that stuff.  I wish I could explain it better, but you'll just have to try it: it's definitely delicious! 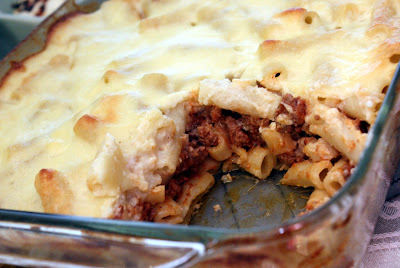 Make the pasta according to the box al dente instructions. Drain, then return to the pot. Mix in the milk, butter, cheese and egg then set aside. Preheat oven to 350.

Make the meat sauce: In a large sautee pan, heat the oil over medium and add onions. Cook for 2 minutes, then add the lamb. Cook until the lamb is no longer pink and the onions are translucent. Drain off the fat. Add the tomato sauce, cinnamon, nutmeg, salt and pepper. Set aside.
(*Note: if using ground beef, the 2 tsp salt should be good... If using lamb, make sure to taste it and add salt as necessary.)

Make the bechamel: In a saucepan, melt butter over medium heat. Mix in the flour and salt. Slowly stir in the milk, whisking constantly so there are no lumps. Cook, stirring, on medium high heat until sauce thickens (thicker than gravy, not as thick as sour cream) then take off heat. Mix in the egg, stirring well. Mix in the cheese.

Spread half the noodles into an 11x7 or a 9x9 baking dish. Spoon on all the meat sauce and spread so it's even. Top with the remaining pasta. Pour the bechamel over so everything's covered. Bake uncovered for 45 minutes or until top browns. (I shoulda baked mine a bit longer to have it brown all over but we were impatient, lol.) Allow to stand for 10-15 minutes before serving.

Okay and for those green beans:
These are SUPER simple and absolutely awesome. I think I actually ate MORE of them than of the pastitsio, lol. (I heard a radio commercial say that the average american gains 10 lbs during Thanksgiving/Christmas holidays... not for me, thank you very much.) So. I got 2 bags of the prewashed, steam in the bag green beans (from Wegmans, though I'm sure most grocery stores have something similar). I microwaved it for 30 seconds shorter than the instructions said. Drained them, then put into a bowl. Drizzled some olive oil and lemon juice from half a lemon, sprinkled with salt, ground some red pepper flakes and viola! Absolutely perfect green beans! I will make those over and over again!
Posted by Caroline