Thanksgiving is 4 days away, and Friendsgiving was just last week. Neither would be complete without TURKEY! 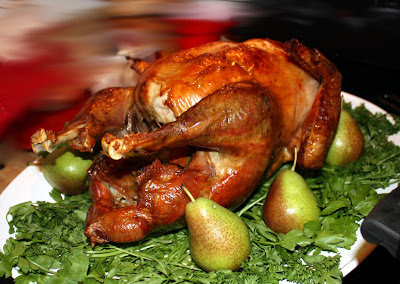 The Friendsgiving invite put full disclosure out there: I had never made a turkey before, so I promised to have some deli turkey and sandwich bread just in case, haha! I lied, though - I had no back up plan that day! I basically obsessed over how to roast a turkey for the week before Friendsgiving and gave it my best go. I came across 2 different recipes/methods for making the turkey: the first that involves refrigerating the bird overnight w/o it's wrapping found at Simple Bites, and the other where you roast the bird breast side down so the juices all drip into the breast while cooking - I can't find the link to the site right now, but when I do, I'll edit this post. It was basically a 24 hour process - I started to prep the night before. Actual cooking day, took about 15-20 minutes to prep, and then roast away. Between the two, I totally NAILED it! My house semlled delicious, the turkey was moist and seasoned just right. AND it was gorgeous. Recipe WIN.

This is what I did. I was cooking for 14. Combined with the apps and all the delicious side dishes everyone brought, there was plenty of food to stuff us that night AND have enough leftovers to bring home a full meal each!

The night before: Make space in your oven for the bird! Remove the giblets (keep in a ziplock bag - use to make the gravy). Rinse the turkey very well inside and out. Pat dry with a paper towel. Lightly salt the inside of the turkey. Lightly salt the outside of the turkey. Spread an entire stick of butter around the entire outside of the bird. Put bird breast side down onto the rack in the roasting pan. Put back into the fridge overnight. No, don't cover it with anything - just put it on the rack and throw in the fridge. The point is to dry out the bird a bit. 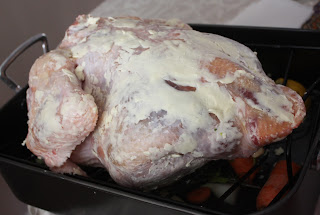 (See : it's breast side down)
The day of: Take the bird out of the fridge and bring up to room temperature (took me about 2 hours). Drain/wipe up the liquid that's in the pan.

Preheat the oven to 400 degrees. Lightly salt the inside of the bird again. Shove the inside of both cavities with a couple sprigs of parsley, then an equalish amount of the onion, carrots, and celery, and the lemon. You'll probably use about half of what's in the ingredient list. Shove a handful of parsley and 2 sprigs each of thyme and rosemary into any leftover space between all those veggies. Try to make it kind of even. Lightly salt the outside of the bird again. Toss the leftover onion, carrot, celery and lemon into the bottom of the pan.

Stick the probe part of the thermometer into the thickest part of the bird (into the inner thigh near the breast), but don't allow it to touch the bone. (If you're using an instant read thermometer instead of the probe, first, don't leave it in the bird while cooking --  insert and check the temp when it comes out of the oven.) Roast at 400 for 30 minutes. Drop the temperature to 350 and roast for approximately 1-1/2 to 2 hours or until the internal temperature reaches 155 degrees. 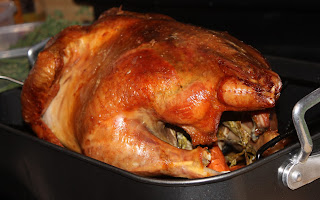 (OMG look how golden!)﻿
Take the turkey out of the oven. Flip the breast to right side up. Be very careful and use your oven mitts - sure they'll get a bit dirty, but much better than burning yourself! 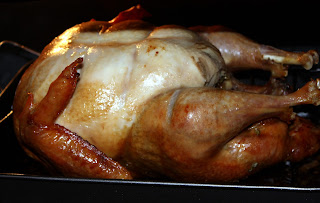 (Someone needs a tan!)
Put back into the oven and roast until the breast is golden - about 15-30 minutes - and the temperature reads 165 degrees. Take out of oven. 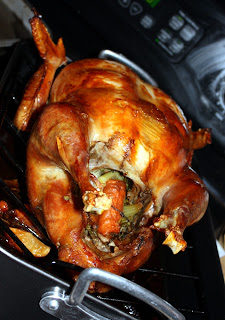 Tent with foil. Allow to rest for at least 30 minutes. I'll say it again - let it rest! Two things happen while it rests: The turkey will continue to cook up to about 170-175 degrees, which is safe eating temps, and it allows time for the juices to redistribute throughout the bird.
To decorate (see first picture): Line plate with the parsley, and a few sprigs of the thyme and rosemary if you like. Put bird on it. I added these mini pears I found because one of the desserts was a pear and blueberry crisp. You can also use crabapples, slices of lemon, mini pumpkins, or anything really!
To carve the bird: I should have cut the legs and thigh off first, but I forgot, lol. Instead, I cut the the entire breasts free from the bird, then cut slices so everyone got the same amount of skin. My cutting was very messy, but everyone got plenty to eat.

This bird had flavor! It wasn't too salty, wasn't dry, the skin was golden and delicious... Total success! If I can do it, so can you!

One pretty important note: This recipe is for a 15 lb bird. Cooking times obviously vary according to the size. Use the Simple Bites link for a good idea of how long to roast different size birds.
Posted by Caroline