Who's got 2 thumbs and is super giddy that she received her order of vanilla today? This girl! I've mentioned before that vanilla is by far my favorite ingredient. Chocolate? Bah. In fact, most chocolate goodies taste better with vanilla in it, so there! Vanilla is king... and I may or may not have done a happy dance when I opened my box of extracts. Three vanilla extracts, to be exact. I'm guessing the average bear doesn't even know there are 3 types. Well there are: Bourbon-Madagascar, Mexican, and Tahitian. 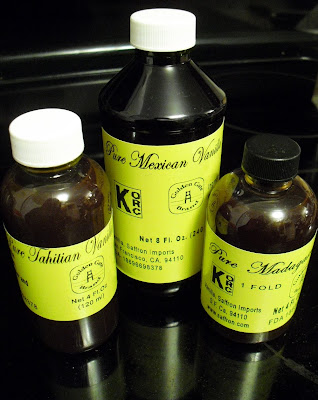 Where does vanilla come from? The short answer is: a flower. It starts with the vanilla orchid vanilla planifolia. Of the thousands of varieties of orchids out there, it is the only one that produces something edible. It's native to Mexico, but thanks to some world traveling Frenchmen, sometime in the 19th century, it made its way to the Isle of Bourbon in Madagascar. Those French folks found a way to hand pollinate the orchids, and now Madagascar is one of the biggest producers of vanilla in the world, which is why the vast majority of the vanilla you'll find in your standard grocery is Bourbon Madagscar vanilla.

Bourbon-Madagascar vanilla comes from the original Mexican vanilla v. planifolia, but since it's pollinated differently, it doesn't taste quite the same as the Mexican type. Bourbon Madagascar vanilla is Old Reliable. It has a sweet, creamy and strong flavor. It's the generic vanilla that never lets you down.

Mexican vanilla is the original V. planafolia. It grows naturally there, and is naturally pollinated by the native bees. It's produced in smaller amounts and goes by the name Mexican vanilla. This is a more mellow sweetness, smooth and strong, and then has this slight woody note to it. It's complex, more interesting than the Bourbon-Madagascar type, and thus, in my opinion, is the best (thus the extra big bottle I ordered!)

One side note about Mexican vanilla - if you do see it in Mexico, make sure it says "Pure Mexican Vanilla" and try to get it from a reputable source. I've read that some of the vanillas they sell in Mexico are mixed with the extract of the tonka bean, which can cause liver or kidney damage. The specific offender is coumarin, and it's banned by the FDA.

So that third kind... Tahitian vanilla. To be honest, I've never smelled it until today. I've read about it, which is how I know it's not the same plant as the Mexican or Bourbon vanillas. Tahitian vanilla comes from v. tahitiensis, a different strain of vanilla. It may have been a mutation, or a hybrid. Either way, it's different. Tahitian vanilla is a favorite of pastry chefs and perfume makers because, while it's not as strong in flavor as the others, it's more aromatic and floral.

So now that I've got my new extracts, guess who's going to be doing more baking! I'm so excited to experiment with the flavors and to develop my nose for them. Next time I'm going to have to get all 3 types of beans to compare!

Oh, and to be fair, there are actually more than 3 types of vanilla. These are just the 3 most popular. :-)

Email ThisBlogThis!Share to TwitterShare to FacebookShare to Pinterest
Labels: miscellaneous