I have a go-to baked pasta recipe that is affectionately called Death by Cheesy Goodness - one serving nearly puts me in a coma. A delicious coma. It's awesome, but let me say it again - coma. So the other night I had a craving for it but didn't want to pass out, so I came up with this "lighter" recipe. Basically it's spaghetti layered with mozzarella so the cheese gets all melty in the middle, but it's not so much that I go catatonic. 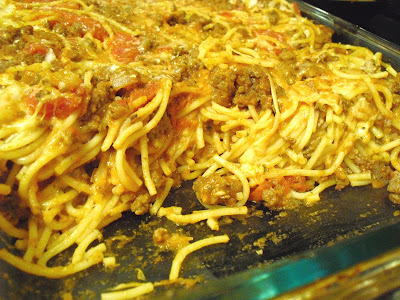 The good thing about this is that it can easily be adapted - use ground turkey, italian sausage, or no meat at all. Not that I'd ever got that last route since I'm a carnivore, but I suppose chopped up portabellas could work as a meaty veggie substitute. This makes a full 9x13 dish - so easily 12 servings. Enjoy!


Spaghetti Casserole
olive oil
1 onion, diced
3 cloves garlic, minced
1 lb ground beef (I used 90/10)
salt, pepper, dried basil, dried oregano
1 jar/can spaghetti sauce (I used Hunt's meat flavor)
1 can diced tomatoes (with basil and oregano if you like)
16 oz part skim mozzarella, grated
grated parmesan cheese
1 box thin spaghetti
Bring a big pot of water to a boil and toss in about 2 tsp or a tbsp of salt. Drizzle oil into bottom of a large pan put over medium heat and sautee onions until soft. Add garlic and ground beef. Season with salt, pepper, basil, and oregano. Cook, breaking up the meat into small pieces, until done - taste and add seasoning as necessary. Add the spaghetti sauce and diced tomatoes to the meat, and stir to combine and allow to simmer to heat through.
Preheat oven to 350 and take out a 9x13 baking dish. When the water comes to a full rolling boil, add the spaghetti. Cook for 7-8 minutes - most boxes say 9-11 min so you want to undercook it so it comes out of the oven al dente. Turn off heat and strain the pasta then put back into pot. Add about 3/4 the sauce to the spaghetti and mix.
To assemble: Spoon a thin layer of sauce on the bottom of the baking dish. Spread half the pasta into the dish. Layer half the shredded mozzarella and enough parmesan to cover it. Add the rest of the pasta, the rest of the mozzarella, and the rest of the sauce. Grate some more paremsan on top. Bake for 30 minutes or until the edges are bubbly and cheese is melted.
Posted by Caroline