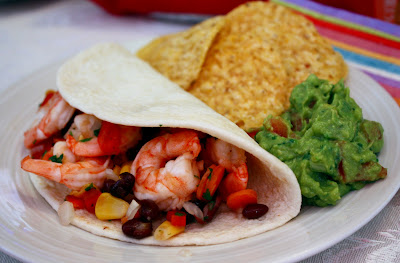 I can't believe we had an earthquake here in VA. I've spent a lot of time in LA and never once felt one. I read that Santorini is accustomed to feeling earthquakes, too, but I didn't feel one while I was there either. My mom just told me she grew up with them in the Philippines, but I had no idea there were quakes there. So when everything started shaking like a freight train was coming at us... very surreal! To be honest, one of the first things I thought was What happened in DC that we can feel it here? Oh these times we live in. *shakes head* Anyways, we got evacuated and had to head outside. Thankfully it was wasn't raining, so we got to all freak out in nice weather :-)

It was that nice weather that made me think of grilling. Today was pretty much glorious, and I wanted to take advantage of that before Hurricane Irene makes it up the coast this weekend. I originally thought of getting a steak, but then I remembered the leftover black bean salsa from this weekend. And the lone avocado begging to be made into guacamole. So THEN I thought I'd grill up some fish for tacos. But hey why buy fish when I have frozen shrimp, thus how I came to these awesome flavored shrimp tacos.

The lime and garlic make the flavor pop, with just a hint of heat so it paired nicely with the slightly thicker flour tortillas and salsa. I would have loved some cabbage slaw on it for more texture, but Alan broke up some tortilla chips for the crunch and that worked just fine! This was enough for 3 or 4 tacos, so scale as necessary. BTW I never did end up grilling these, haha, I just sauteed them, but I have no doubt they'd be better actually grilled.

Combine lime juice, olive oil, garlic, cumin, chili flakes, and white pepper. Add the shrimp and marinate for about 5-10 minutes. The shrimp will start turning pink because the citrus is "cooking it". Add them to a skillet on medium high heat and toss until they are pink and form an almost closed C.

Serve on tortillas. I recommend The Farm at Red Hill black bean salsa with it, which is spicy and bold - it's what I'm trying to duplicate, so whenever I get it just right I'll add that recipe to the blog, too. I also topped with guac and chips a la Alan.
Posted by Caroline