Just about 2 months ago I was kicking it in Cabo. What better way to remember that great time than by hosting a little Cabo reunion? (Shout out to Jeffrey, Ang., Danielle, Mike, and Team Heater!) Each of us made something that reminded us of our trip - there was ceviche, tacos, margaritas... And I made the two things that were served with every single meal (and snack) in Mexico: pico de gallo and guacamole. Both were always so fresh, soooo tasty, so Mexican, lol. And you know what, I never once got sick of either while I was there :-) These two are a natural pairing - they share many of the same ingredients and thus complement each other well. 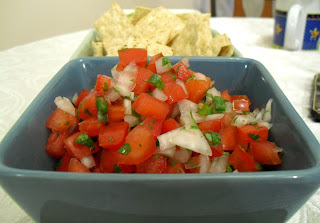 Pico de Gallo
4 plum tomatoes, seeded and diced (I took out most of the fleshy insides so it wouldn't get too mushy - just toss those into a pasta sauce)
1/2 medium-large sized vidalia onion, diced
1-3 jalapeno peppers (depending on how hot you want it), seeded, deveined and diced small
1/2 C cilantro leaves, then chop finely
1/2 lime

Combine the tomatoes, onion, jalapeno, and cilantro. Juice the lime all over, and mix. Add garlic powder and mix. Add salt to taste. Cover and let it sit in the fridge for at least an hour to let the flavors mingle then serve.
The funny thing about guacamole is that I did not like anything that had to do with avocados for most of my life. I think I only developed a liking love for it in the past couple years. Now I probably make something with avocado a few times a month. 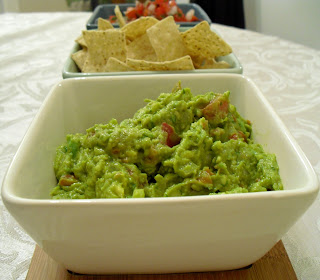 Guacamole
from Alton Brown
3 ripe avocados (should give a little when squeezed)
2-3 plum tomatoes, seeded and diced
1/4 medium-large vidalia onion, diced finely
1 clove garlic, minced
1/4 C cilantro, then chop finely
1/2 lime (mine was large and really juicy, so if yours isn't that big/juicy, use a whole lime)
1/2 tsp cumin
1/4 to 1/2 tsp cayenne pepper (mine was closer to 1/2 tsp)
salt
Cut open avocados, remove pits (don't throw them away!), and scoop out into a bowl. Mash lightly and squeeze lime juice over it to keep from browning. (Note: the avocado will continue to break down when you mix in the rest of the ingredients, so mash only enough so it's twice the chunkiness you'll want in the final product.) Mix in tomatoes, onion, garlic, cilantro, cumin, cayenne, and salt. Taste, and add seasonings as necessary. Squeeze the hell out of the lime so whatever juice is left covers the guac, then add pits to stave off browning. Cover - press the plastic wrap down directly onto the guac to keep oxygen out so it doesn't brown - and let sit in the fridge for a few hours for flavors to hang out and get to know each other.
Posted by Caroline